In 2010, 17 year old David MacKinnon was your typical teenage boy. He was in 11th grade and getting ready to enjoy summer break. David had been feeling lethargic, and lacked his typical appetite. After routine tests, David was diagnosed with end stage renal failure. After seeing his physician, the MacKinnon’s found out that David would need emergency peritoneal dialysis and would require a kidney transplant within a year if he was to survive.

While David began dialysis, his mother Michelle worked to become his kidney donor. With luck, Michelle and David were almost perfect matches and became optimistic about David’s kidney transplant. Over the next few months, David’s transplant surgery was cancelled twice with a third date set for June 8, 2011. David died on June 8, 2011 before receiving his new kidney.

Following the loss of their son, the MacKinnon family chose to honour David’s memory and founded the David Gregory MacKinnon Memorial Foundation in 2012. Inspired by David’s personal interests, their charitable organization strives to provide scholarships for those interested in pursuing careers in aviation, architecture, art and medical science. Additionally, their foundation provides support for the community by purchasing medical equipment for Renal Centres and assisting with the cost of patient medication.

With the funds received by Delta Bingo & Gaming, the David Gregory MacKinnon Memorial Foundation is able to make meaningful contributions to the community in honour of David. 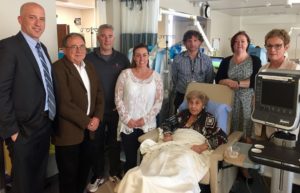