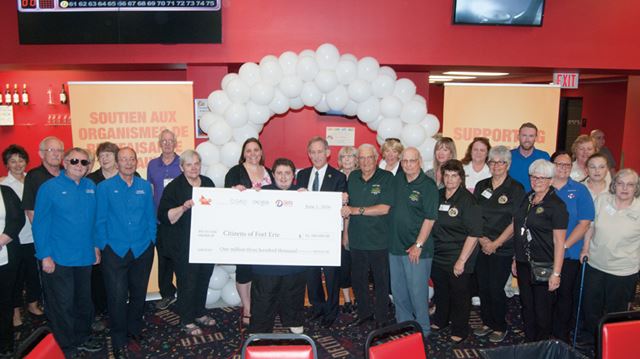 Weak Canadian dollar has brought American gamblers back over the border.

FORT ERIE – A major revenue milestone was marked in Fort Erie last week when it was announced that $1.3 million has been raised for local charities through bingo and gaming revenue.

A trifecta of government acronyms – Ontario Lottery and Gaming (OLG), Ontario Charitable Gaming Association (OCGA), and the Commercial Gaming Association of Ontario (CGAO) – gathered at Uncle Sam’s Delta Bingo on Wednesday to announce the milestone achievement, which has pumped $1.3 million into dozens of local charities. Uncle Sam’s was one of the first bingo parlours to convert to the province’s new e-Bingo facilities back in 2014 was part of the government’s overhaul of gambling in Ontario.

“The town of Fort Erie is very proud of our community partnership with Delta Bingo and its 32 local charities and not-for-profits that have raised over $1.3 million for programs and services in our town in just over two years,” said Mayor Wayne Redekop. “All of these funds remain in our community and benefit the people of Fort Erie in ways that have truly remarkable impacts.”

Many of the local charities who benefit from the charity bingo program were on hand for the ceremony, including Community Living Fort Erie, the Adult Literacy Council, Community Outreach Program of Fort Erie, and dozens more.

“Today is about celebrating the wonderful success of charitable gaming in Fort Erie,” said Lynn Cassidy, executive director of the OCGA. Charity gaming revenues have seen a sharp rise in recent months which tracked evenly alongside the fall of the Canadian dollar against the American dollar. Many businesses and agencies in Fort Erie have noted that a weaker Canadian dollar has brought American tourists back across the Peace Bridge and boosted revenues along the way.

“From my understanding, border communities like Sarnia, Windsor, Fort Erie and Niagara Falls are seeing a strong increase from American visitors, so I’d say yes, the value of the Canadian dollar has a direct impact on the bottom line here,” said Cassidy.

Since the charity bingo program first began about 10 years ago, more than $100 million has been raised for Canadian charities through the 31 different charitable gaming centres – many located strategically along the U.S. border – which pump the money back into locally focused initiatives.

“OLG is proud of the charitable gaming revitalization program and the role we play in providing sustainable revenue sources to the charities that serve the Fort Erie area,” said Rick Gray, OLG’s vice president of charitable gaming.

However, before the OLG, OCGA, and the CGAO took over the charity gaming landscape, Fort Erie hosted its own charity bingo events which, during the wild west days before stricter regulation, were a license to print money for many years.

“I remember when a single bingo event at the track would bring in hundreds of thousands of dollars, but those days are gone,” recalled Redekop.

The post-9/11 crackdown on border security took a major bite of local bingo revenue as senior citizens – the target market for bingo – stopped crossing the U.S. border since many lacked a passport.

That was followed quickly by another major change which devastated bingo revenues even further: anti-smoking regulations. Once provincial rules changed and smoking was banned at all indoor commercial facilities, bingo halls across Ontario watched as their customers left in droves.

Delta Bingo is located at 427 Garrison Road, Fort Erie, ON.

To read more articles by Niagara This Week, click here.