This program, which began over a decade ago, is delivered through a partnership between Ontario Lottery and Gaming Corporation (OLG), the Ontario Charitable Gaming Association (OCGA), the Commercial Gaming Association of Ontario (CGAO) and local gaming and bingo centre operators.

Delta Bingo & Gaming Brampton hosted the official celebration for the $3 million milestone, as this location converted to an eBingo facility in July 2013. 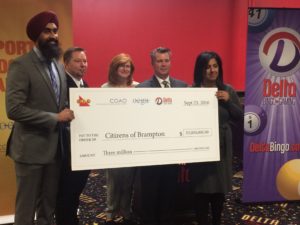 “It’s quite an achievement, raising $3 million to benefit local charities and non-profit organizations in our community,” said Harinder Malhi, MPP Brampton Springdale. “I’m impressed with the work that has been done locally through the revitalization of Charitable Gaming. I want to commend the staff at Delta Bingo and Gaming, OLG, and most importantly, the many charities and their volunteers who have helped reach this milestone and continue to make the City of Brampton a great community.”

“The City of Brampton is very proud of our community partnership with Delta Bingo and Gaming and their 31 local charities and not-for-profits that raise over $1 million annually for programs and services in our city,” said Councillor Gurpreet Dhillon, Acting Mayor on behalf of Mayor Linda Jeffrey and Brampton City Council. “All of these funds remain in our community and benefit the people of Brampton in a way that is truly impactful.”

“OLG is proud of the Charitable Gaming Revitalization program and the role we play in providing sustainable revenue sources to the charities that serve the City of Brampton,” said David Fraser, OLG’s Director of Governance and Relationship Management for Charitable Gaming

“Today is celebrating the wonderful success of Charitable Gaming in Brampton.” said Lynn Cassidy, Executive Director of the OCGA. “This initiative is making a big difference to many local charities that provide important programs and services.”

Background on Charitable Gaming in Ontario

In the past 10 years, OLG has been working with the CGAO and the OCGA to revitalize the province’s Charitable Bingo and Gaming industry. By developing and introducing new products and technologies that have invigorated the traditional charitable gaming experience, more money has been generated for thousands of local charities across the province. The revitalization initiative is preserving and enhancing funding for charities across Ontario while creating economic benefits, including employment opportunities at local charitable gaming centres.