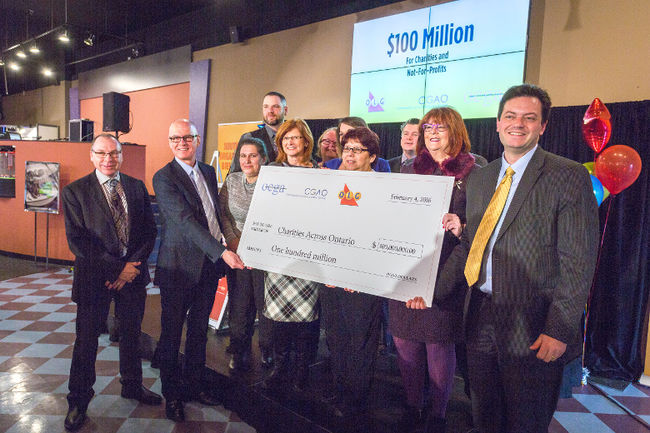 That’s the amount of money raised for local charities across the province through the OLG Charitable Gaming (cGaming) initiative. The initiative to revitalize charitable bingo started over 10 years ago with the launch of Boardwalk Gaming Centre Barrie, the first of six pilot sites chosen to test the new partnership between charities, bingo operators, and the OLG.

The initiative has transformed 31 bingo halls – long thought of as smoke-filled, church basement venues, complete with blue rinse and walkers – into vibrant new gaming centres with a variety of different offerings, both traditional (paper bingo) as well as electronic bingo, and electronic ticket dispensers known as TapTix machines.

Barrie MPP Ann Hoggarth, one several local dignitaries on hand, praised the 1,800 charities involved with the program for the great work they do in their communities with the funds raised through the program, and made special note of the thousands of volunteers needed to not only support the work at the gaming centres, but to also deliver the much needed services in the community.

Barrie Mayor Jeff Lehman also spoke directly to the volunteers from some of the 60 charities in Barrie who raise funds through Boardwalk Gaming Centre Barrie. While he praised the money raised throughout the province, he talked specifically about the $12 million that has been raised for the charities in Barrie over the past 10 years – and how that money filters into the community through the projects and work of groups like the OSPCA and Big Brothers Big Sisters. He also thanked Boardwalk Gaming for their commitment to the project – which represented substantial financial investment – and that the centre employs more than 40 people.

Also in attendance was Greg McKenzie COO of the OLG, and Lynn Cassidy of the Ontario Charitable Gaming Association. Both addressed the group which was comprised of operators, charities and their volunteers, as well as local players. They too praised the work of the charities involved, and the operators of the 31 gaming centres. Cassidy closed out the celebration by giving a special thank you to the players who continue to support the centres every day.

“None of this would be possible without you,” he said.

The festivities finished with a free game of bingo for $1,000. The prize was shared between two regular players.

Jamie Hall of Simcoe Community Services emceed the event – and spoke from the heart about the work that his organization does with proceeds from the gaming centre. He also pointed out one of the clients served by SCS Denis who regularly volunteers at the centre, and who also represented the centre in the PanAm Torch Relay which was co-sponsored by OLG and Boardwalk Gaming Centre.

“We are working on plans to expand the operation at 52 Bayfield St. including a new streetscape that will make a great new statement in downtown Barrie – and will allow us to offer more gaming options at the centre and expand on the entire experience patrons can expect. It is much more than just bingo now,” he said.